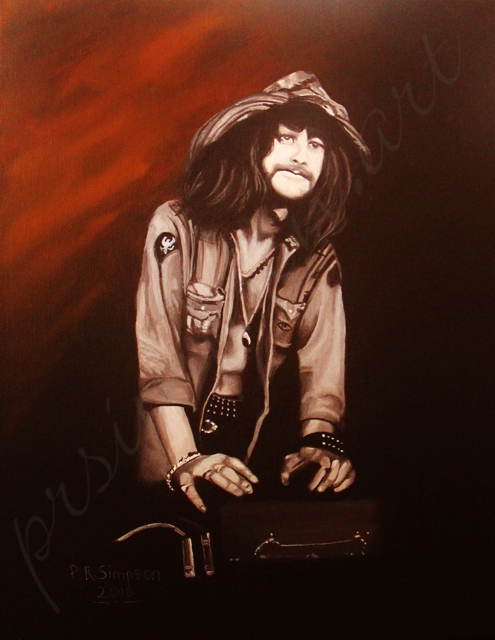 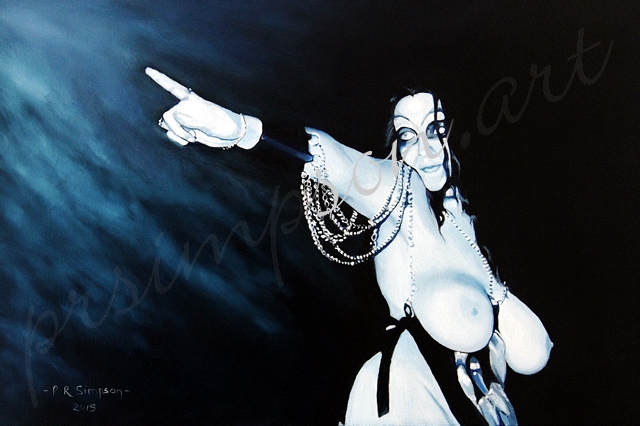 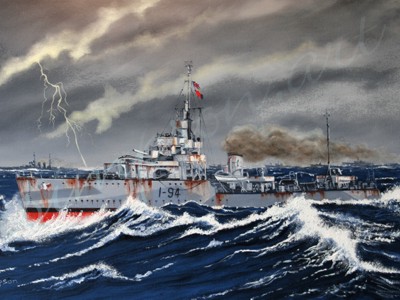 Commissioned for Mike Jones whose father had served on her in 1943. 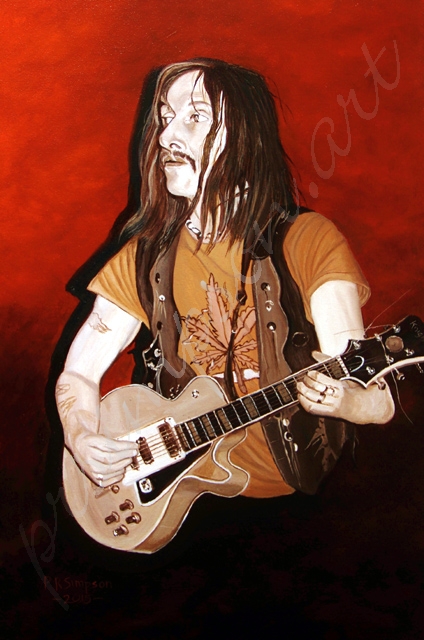 I had been intending on painting this portrait of Dave Brock (1970's Hawkwind) in oil for a number of years. 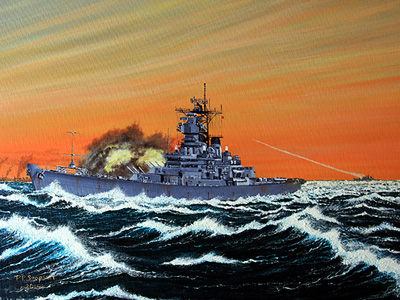 USS Missouri during the Gulf War of the 1990's. Her keel was laid to her last service roll as support for Coalition Forces ousting Sadaam's army from Kuwait. 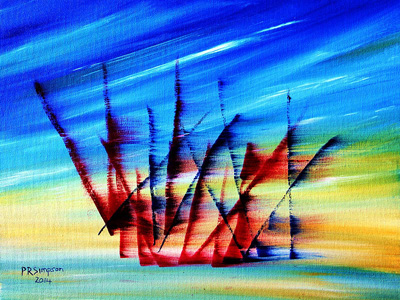 A Fleeting Moment in Time

An abstract impressionistic painting that I tried to capture movement with. Your imagination paints this work and whatever you see is real for you. 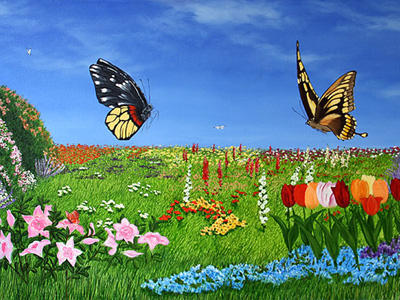 My client wanted something colourful and happy. Alegria is the Portuguese word for joy and this piece brought exactly that when my client first saw it. This makes my artwork all worth while. 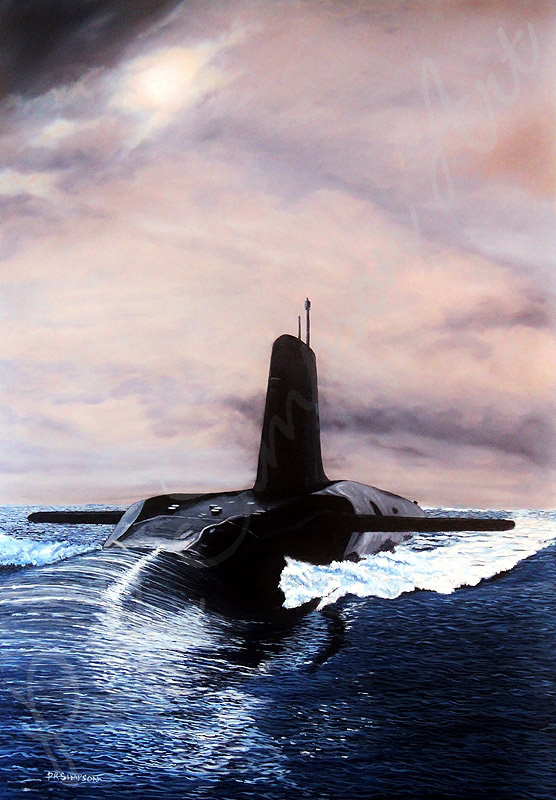 A ballistic missile submarine prepares to dive. On constant alert should the big red button need to be pressed. 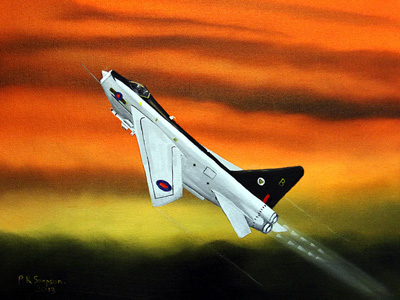 Faster than the speed of sound. British Engineering at its best. An English Electric Lightening. 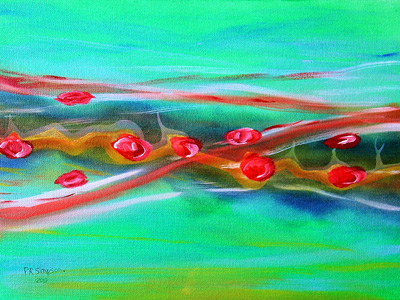 Part of a series of abstract work painted in Brazil. I let my imagination take over and this is one of the results. No conscious thought, just the freedom from the concentration needed to produce detailed maritime work. 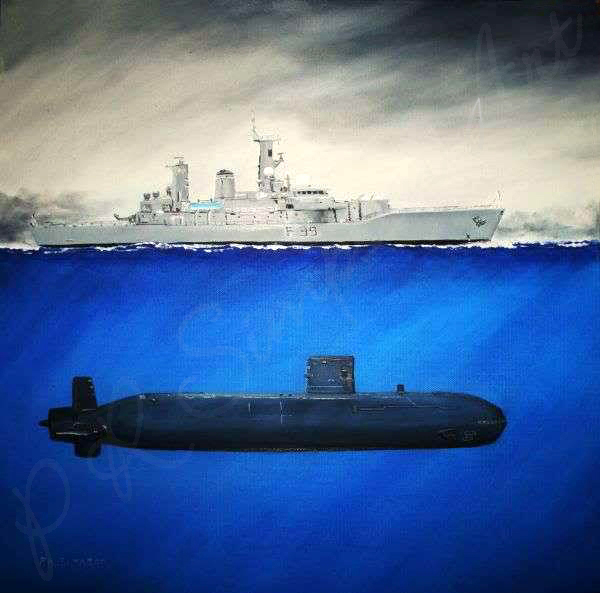 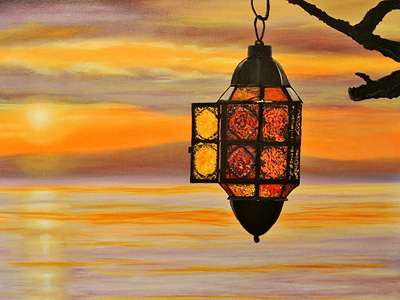 I took a photograph of a Mani sunset when staying in Greece with friends and created this realistic interpretation of what I, and my camera saw. The misty background and sharp focus on the lantern are real. 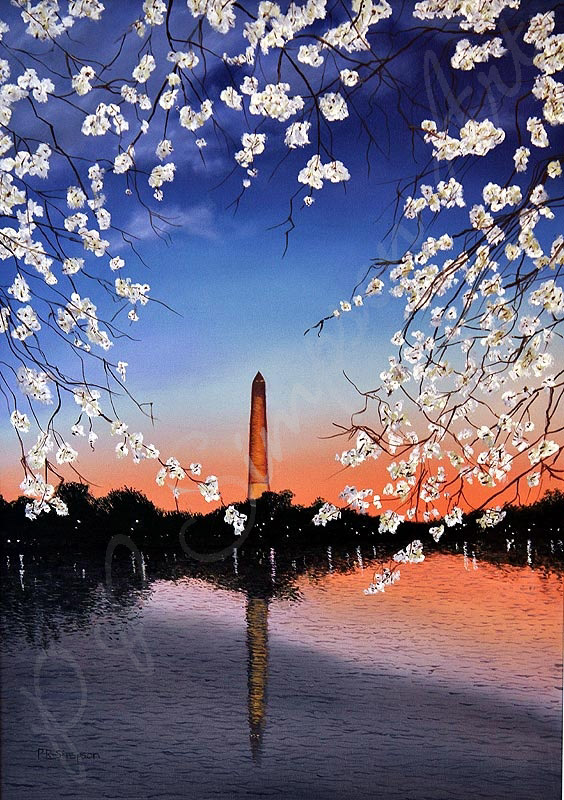 My wife asked me to paint cherry blossom, something I didn't really want to do but when I got into this painting I really enjoyed painting it and using colour to good effect. Not my usual style but when it was finished I studied the water and the reflections in it ... hmmmmm?

After I painted this abstract piece, I was viewing some images taken by the Hubble Space Telescope and then watched the sci - fi classic film Barbarella and the title for this painting came to me 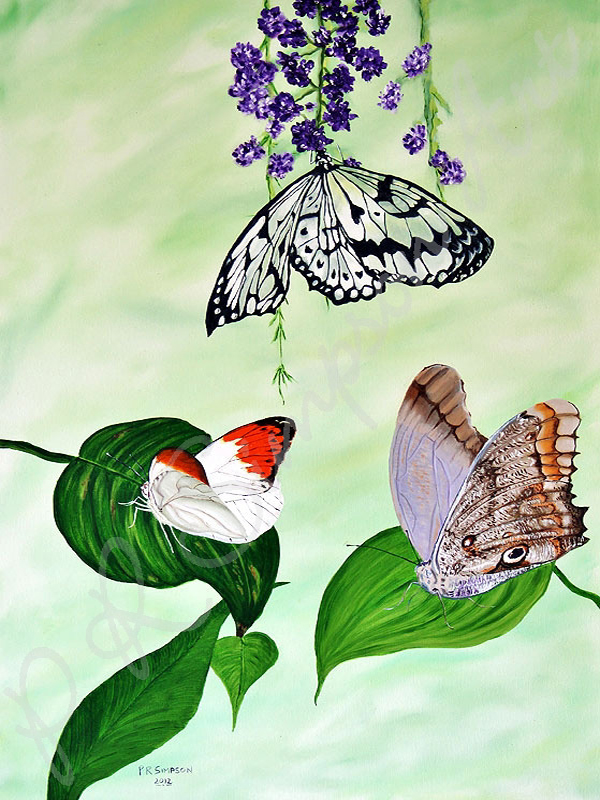 A trip to the Butterfly farm on the Caribbean Island of Aruba prompted this painting and the challenge was to branch away from maritime art to paint some of the wonders that nature has to offer. Some depict Butterflies in a rather simplistic manner but I wanted to capture the detail in both the wings and bodies of each Butterfly to show that they are more complex and beautiful creatures that are often taken for granted in their appearance. 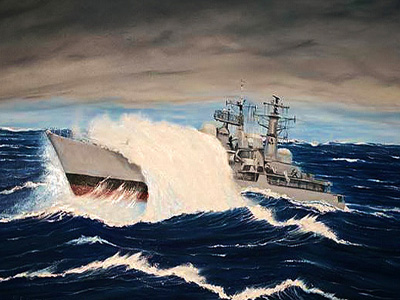 A former student of mine's father showed me some photos of HMS Manchester as she approached HMS Bulwark to refuel and bet me I couldn't paint her with her bow out of the water, so I did and here is the result. 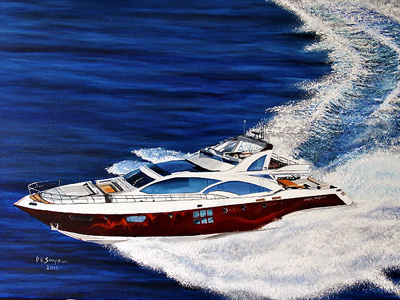 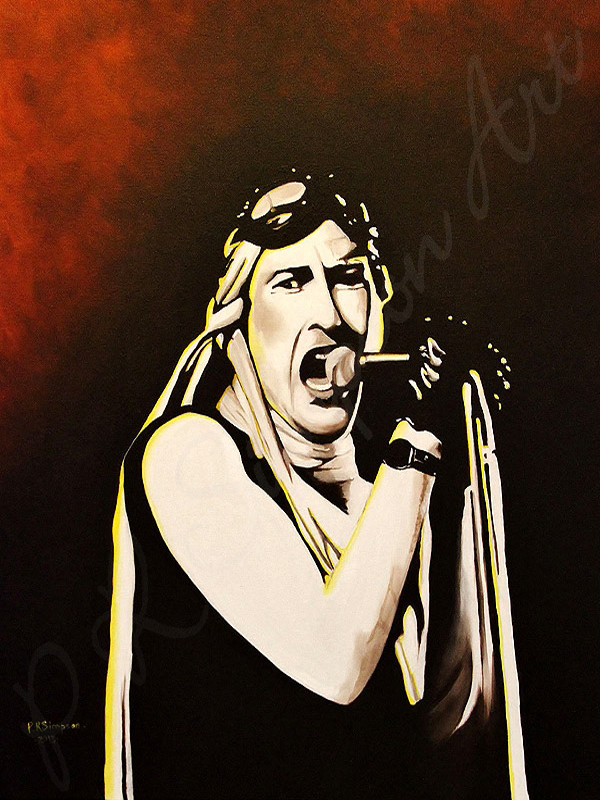 Robert Calvert (1945 -1988). Poet, author, playwright and musician. He was lead singer and wordsmith with a band named Hawkwind during their peak in the 1970's. I have developed an obsession with the man and his work. Robert was bi polar an suffered many breakdowns in his time but when he was up his mind worked at a million miles an hour and it was during these times that his genius appeared. He was a visionary and way ahead of his time and like so many creatives his soul was often tortured due his illness. I remember him with fondness and admiration and his sheer stage presence which I have tried to capture here. 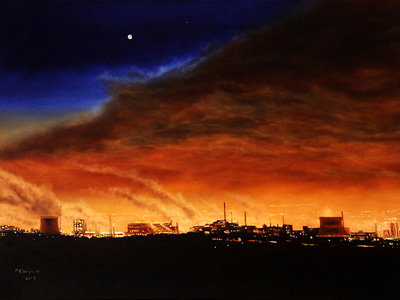 Fire in the Sky

This is an image from my long and distant past and was created on behalf of my brother. It shows the industrial Tees-side landscape that inspired the film director Ridley Scott with his epic film Blade Runner. 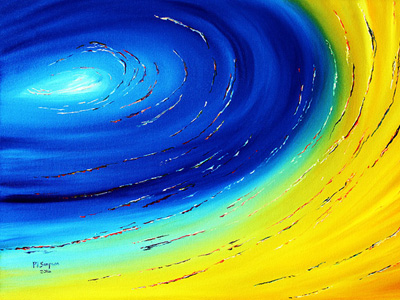 An abstract work to show the freedom of the brushwork than anything else but with minimal colours. 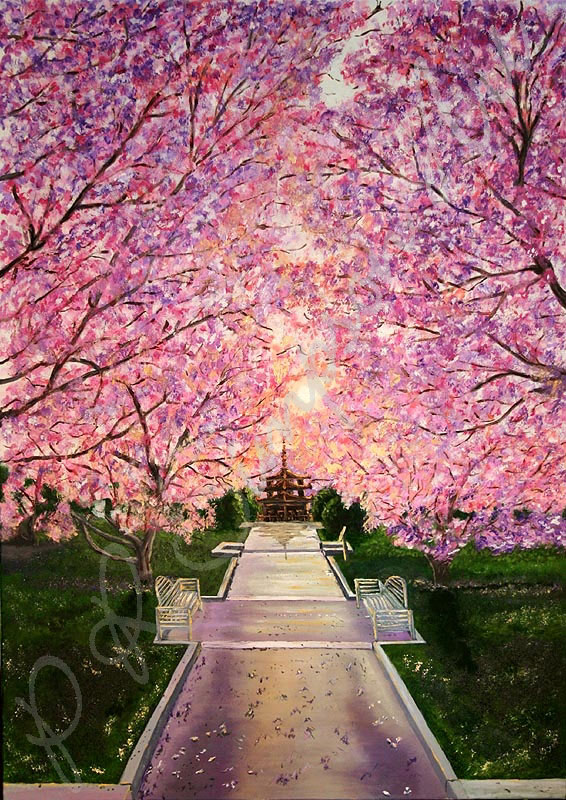 This work was originally meant to show a scene from an avenue lined with Cherry Blossom and there was no Pagoda to be seen. However, it evolved into a scene from a Japanese temple. The reason being that it was shown at The Festival of Japan in Sao Paulo as a promotional piece with a company who produced artwork prints. Needless to say they were very happy to have an original piece in their display. 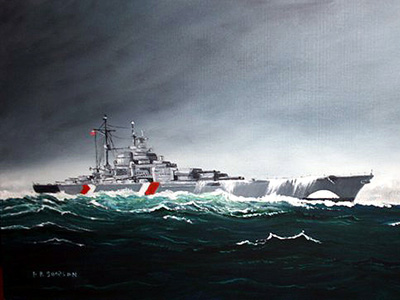 Bismark, the German pocket battleship and most technically advanced warship of it's time. The sky is quite dramatic and the sea is a departure in style for me as I experimented with greens and blues to create the effect you see in this image. 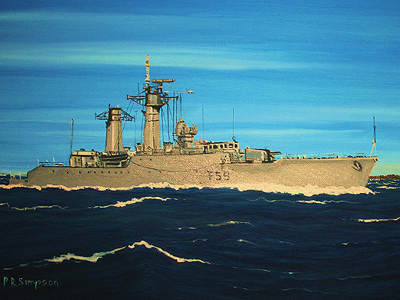 This ship was part of the Hong Kong protection fleet. A friends father served on board and commissioned me to paint this for his father as a gift and also to remember his time in the Royal Navy. 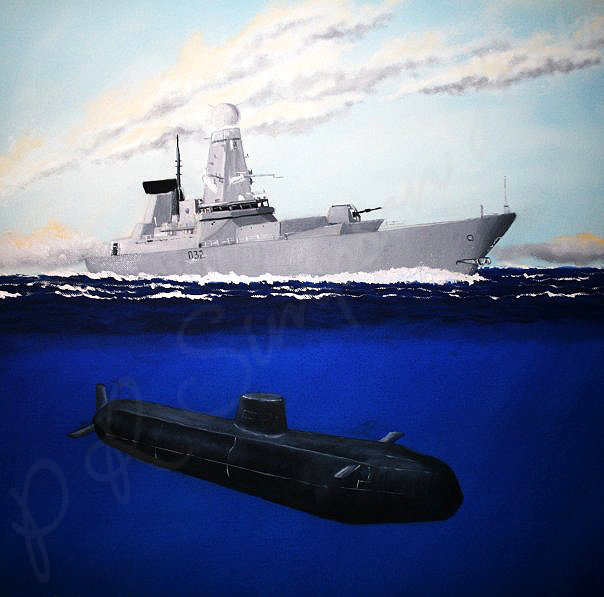 The client who commissioned me was taken by my maritime work and said to me 'I just have to have an original Phill Simpson painting, so I suggested these two weapons of war. They may not have the character of older ships or Submarines but it is what they carry and their role in combat that counts. I have had the honour of seeing these two subjects up close. 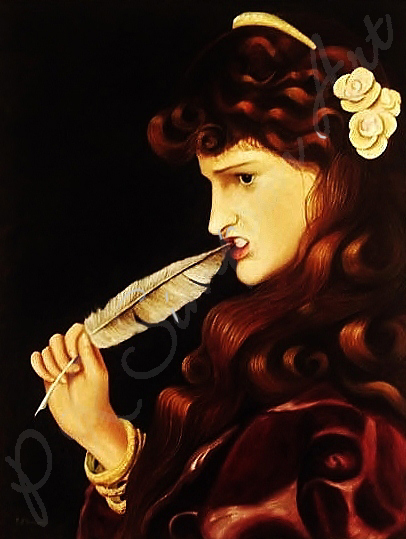 This piece is my take on a painting called 'Love's Shadow' by Frederick Sandys of the Pre-Raphaelite movement. I fell in love with this image and decided to paint it. The differences are in the hair, jewelry and the hand. In the original she is holding a posy of flowers to her mouth and the image makes the viewer wonder what is going through her mind at the time. I was captivated by the facial expression too. It took me about a year to complete in between other work and painting in the hair was very relaxing. 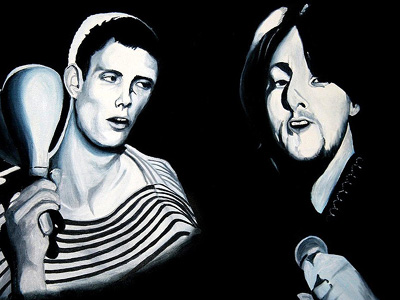 This image of The Happy Mondays was painted from a photograph of a poster he had taken at a very acute angle and was very small indeed. Years of doing pencil portraits from small photographs stood me in good stead with this painting. 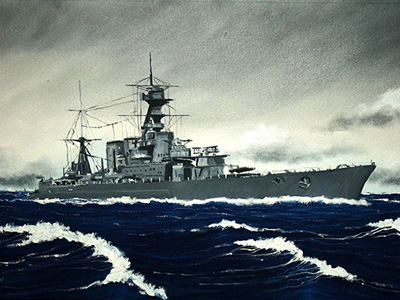 A former colleague commissioned me to paint HMS Hood as a gift for his parents to remind them of his nautical days. A member of the HMS Hood association was very interested, making sure I painted the ship with exact detail & historically correct. 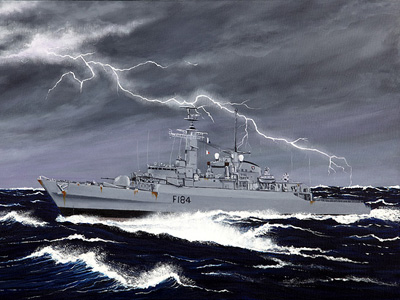 HMS Ardent on her way to the Falklands 1982. It was to be her resting place, sunk with the loss of 22 crew. This is a 30th anniversary rememberance work presented at the annual re union. 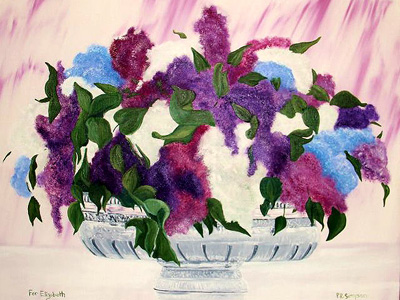 My wife fell for a photograph of flowers in a crystal bowl; as it was approaching her birthday and the equivalent of Valentines Day in Brazil I committed the image to canvass, signed it and painted the words 'for Elizabeth'. Who said romance was dead? 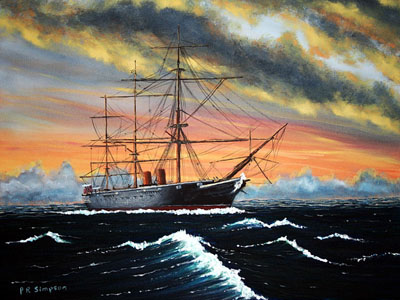 The first iron clad battleship of Queen Victoria's fleet. Powered by sail and steam she was fast, stealthy and heavily armed. Now a museum ship in Portsmouth England she is an integral part of maritime history. 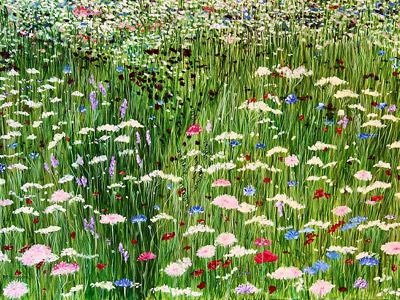 A visit to Arundel Castle in Southern England prompted this work. Incorporating different styles and techniques, it has become a favourite amongst those who have viewed it for its colour and depth.